I'm so far behind this year due to setting up the new website that this is the first chance I've really had to write up a report from a brilliant week spent in Scotland back in November last year. I'd lost count of the number of times clients had asked if I'd be running a workshop to Scotland in the near future, so after a good deal of planning I finally decided to oblige.

The plan was to spend three days in Glencoe then jump on the ferry at Mallaig and head over to the Isle of Eigg for the remaining three days of the tour. Planning a trip such as this in November did seem a little ambitious at the time with so much that could go wrong. Ferries are often cancelled at this time of year due to high winds, and the amount of rain that can fall is biblical! I've visited Eigg at other times of year though, and really wanted us to photograph the area around the sgurr with fiery autumn colours in the bracken and on the slopes of the mountain. I also knew from previous visits that if we were lucky with the light, the area around the Grulin should get some good light at both ends of the day.

Although the workshop was planned for the end of November, I'd still consider this time of year as late autumn, and when thinking of the type of images we'd be trying to produce it was difficult not to visualise some of the iconic scenes cloaked in autumn colour and the russet tones of the Heather and Bracken. As it happened the workshop sold out before it was ever added to the website, and so with slight trepidation accommodation was booked for both locations. At Glencoe we stayed in a fantastic self catering cottage with single occupancy rooms. The cottage is situated at Ballachulish, right on the shore of Loch Leven and in the shadow of the Pap of Glencoe. Self catering accommodation was chosen so that we were not tied to hotel meal times. Having a good stock of supplies at the cottage meant we could head out early in a morning, capture the sunrise, then head back to base for a slap up breakfast if we were near enough. If not it would be no trouble to grab something while on the move. 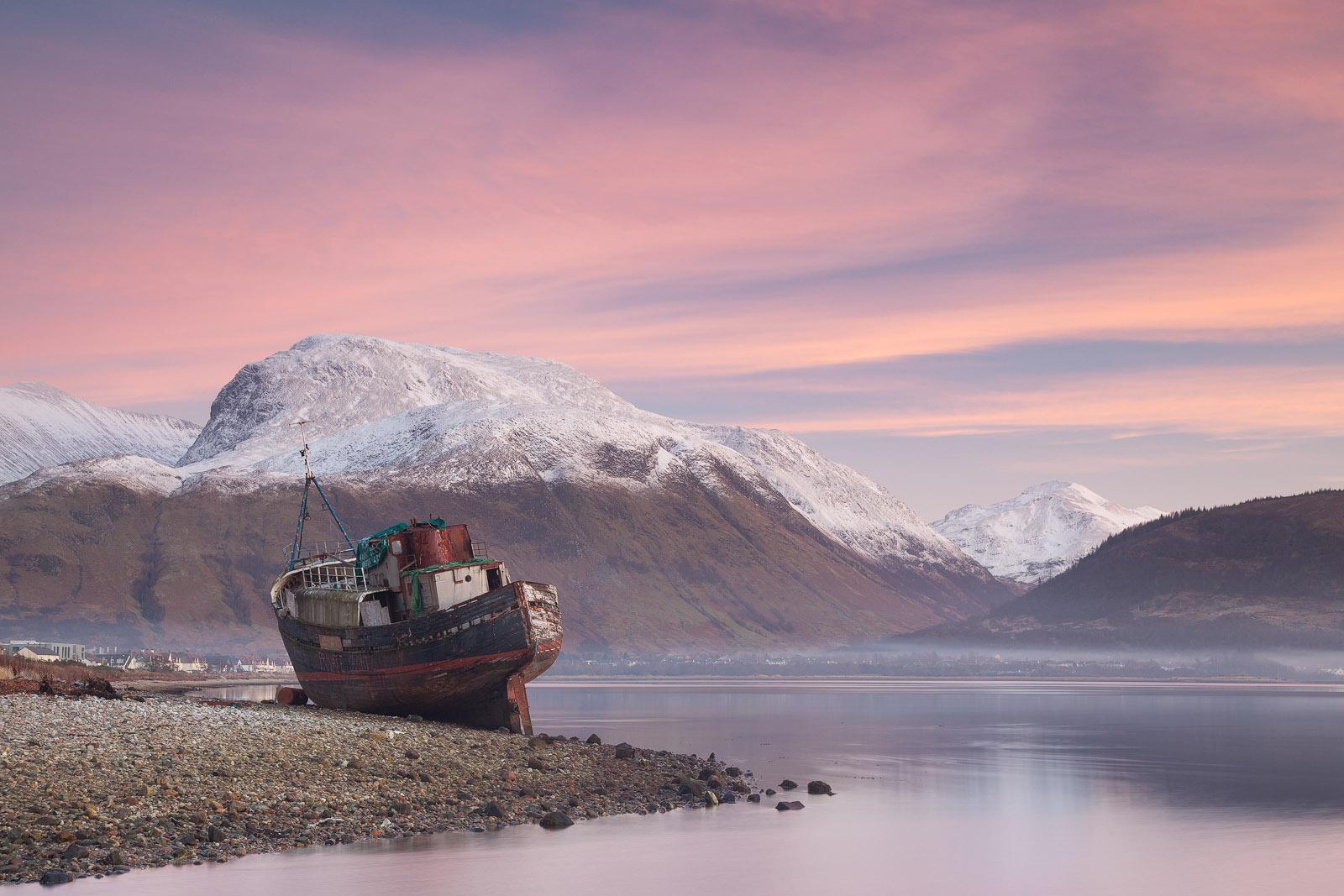 Well the week of the workshop approached, and with it an exciting developement. Glencoe was experiencing snow! Not only snow, but heavy snow. Just four or five days before we were due to travel and weather reports were suggesting that if the snow didn't stop soon the A82  Pass of Glencoe, the main road through Glencoe could be closed. As well as some excitement there was slight panic. If the road was blocked that would effectively be game over and the workshop would have to be cancelled. Even if the road wasn't closed, would it be passable? I had four new winter tyres fitted just in case.

As it happened, on arrival at Glencoe, conditions couldn't really have been much better. The snow stayed on the mountains and kept off the roads... perfect! We knew we were in for something special when driving up the M6 and seeing an amazing Hoar Frost coating everything in perfect white. Having said all this, the first morning was slightly non-descript. A veil of thin cloud remained stubborn for the best part of the day, preventing any decent light from infiltrating the areas we were photographing. Despite this being our poorest day in Glencoe weatherwise, we still managed one or two decent images I think. Starting with views of Buachaille Etive Beag from Lochan na fola and moving on to the classic views of Buachaille etive mor and the River Coupall, we eventually finished the day at the head of Loch Etive after one or two stops along the way.

Day two started off looking a little like the day before except it was obvious that it had been very cold the night before. There was a fantastic hoar frost coating everything. We headed for the lochans on Rannoch Moor which were well and truly frozen over, so much so you could stand on the ice in places. We picked an area to get set up, and it quickly became evident that conditions were changing for the better. A very faint pink glow on the horizon to the south west slowly began to spread, intensifying as time went by and painting the sky above the black mount with lovely soft colour. I always think this area is a bit awkward to compose shots from. The small islands can get in the way of each other and look messy. For this reason I chose a slightly elevated point that allowed me to include the three small islands. I used a panoramic head in conjunction with a 70-200 mm lens. The panoramic head does away with any parallax distortion issues and I'm not sure this particular image would have been possible without it. We visited a couple more locations through the middle of the day, but finished up the last few hours photographing the mighty Ben Nevis from the shore of Loch Leven and what a fantastic end to the day it was. Britains highest peak was covered in snow and the loch was almost flat calm, making it perfect for reflection images. The light of the last hour or so hit the peak of Ben Nevis turning it a lovely salmon pink. We were using Lee Filters big and little stoppers to smooth out any ripples on the Loch at this point as the wind strengthened slightly, but with conditions this good it really was difficult to take a bad image!

Day three was an early start to make the hour long drive down to Kilchurn Castle and Loch Awe. Again we were greeted to the most amazing of conditions. Trees and grasses were heavily Hoar Frosted and the castle itself looked fantastic, as it always does but even more so with a cap of snow on the mountains behind. We witnessed a cracking sunrise and spent a good few hours trying to make use of the frosted trees surrounding the Loch. We finished day three at Loch Achtriochtan in Glencoe after a pretty successful few hours spent at Loch Tulla on the way back. Conditions on day three were actually so good it was frustrating! There were images to shoot in literally all directions and I remember thinking it was actually a crime to drive through Glen Orchy without making any images of the Hoar frosted trees.

The first half of day four was spent making the drive to Mallaig and then the ferry crossing to Eigg, and what a fantastic drive it is. Unfortunately on arrival the conditions we'd previously been very lucky to witness over the course of the last few days had begun to change and a thick fog had taken their place. We dropped off our belongings at the accommodation and headed straight out. There are no visitor cars allowed on Eigg so if you are travelling on the island it's either by foot or the local taxi. We spent a few hours of the first day at Laig Bay, and I think even managed to make one or two nice subtle images around the softening effects of the fog but it was fairly evident that conditions could have been better. 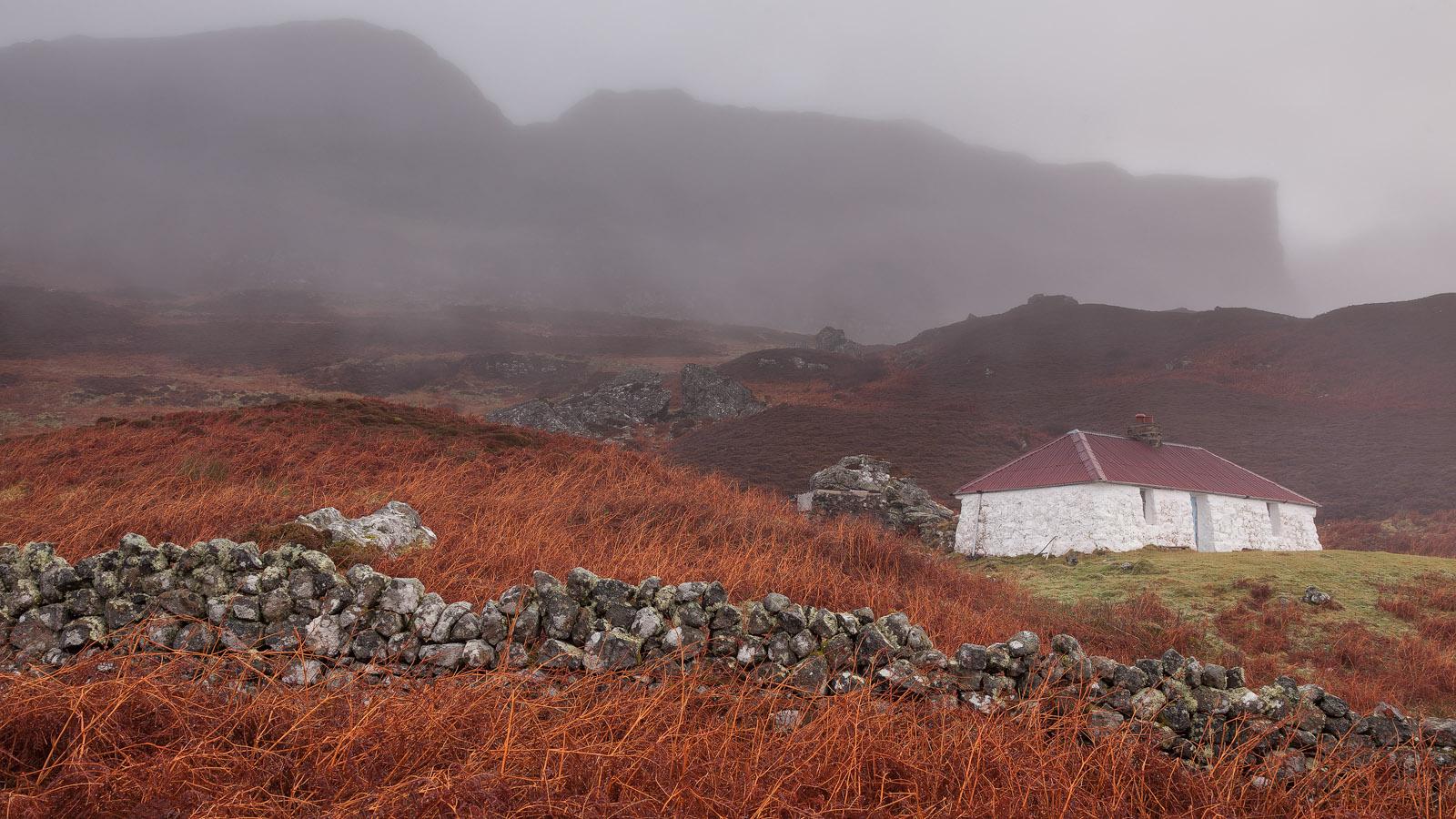 After an early start on day five we made the walk from our accommodation on to the flanks of An Sgurr and an area known as the Grulin. I absolutely love this area! There are gigantic boulders as big as a house, the peak of the mountain, an old crofters cottage and countless remains and ruins of a long deserted ancient village. The location looks positively prehistoric. Unfortunately for us, the same persistant fog from the day before had only thickened, and at times it was impossible to even see the peak of An Sgurr. Nevertheless there was the odd patch or hole in the mist and it was possible, as it always is to make one or two images that work with the aforementioned conditions, even though they were not the ones I had visualised when planning the workshop. We spent that evening at Singing Sands and again I think made one or two very nice images even though at this point I don't think we'd done the area total justice. 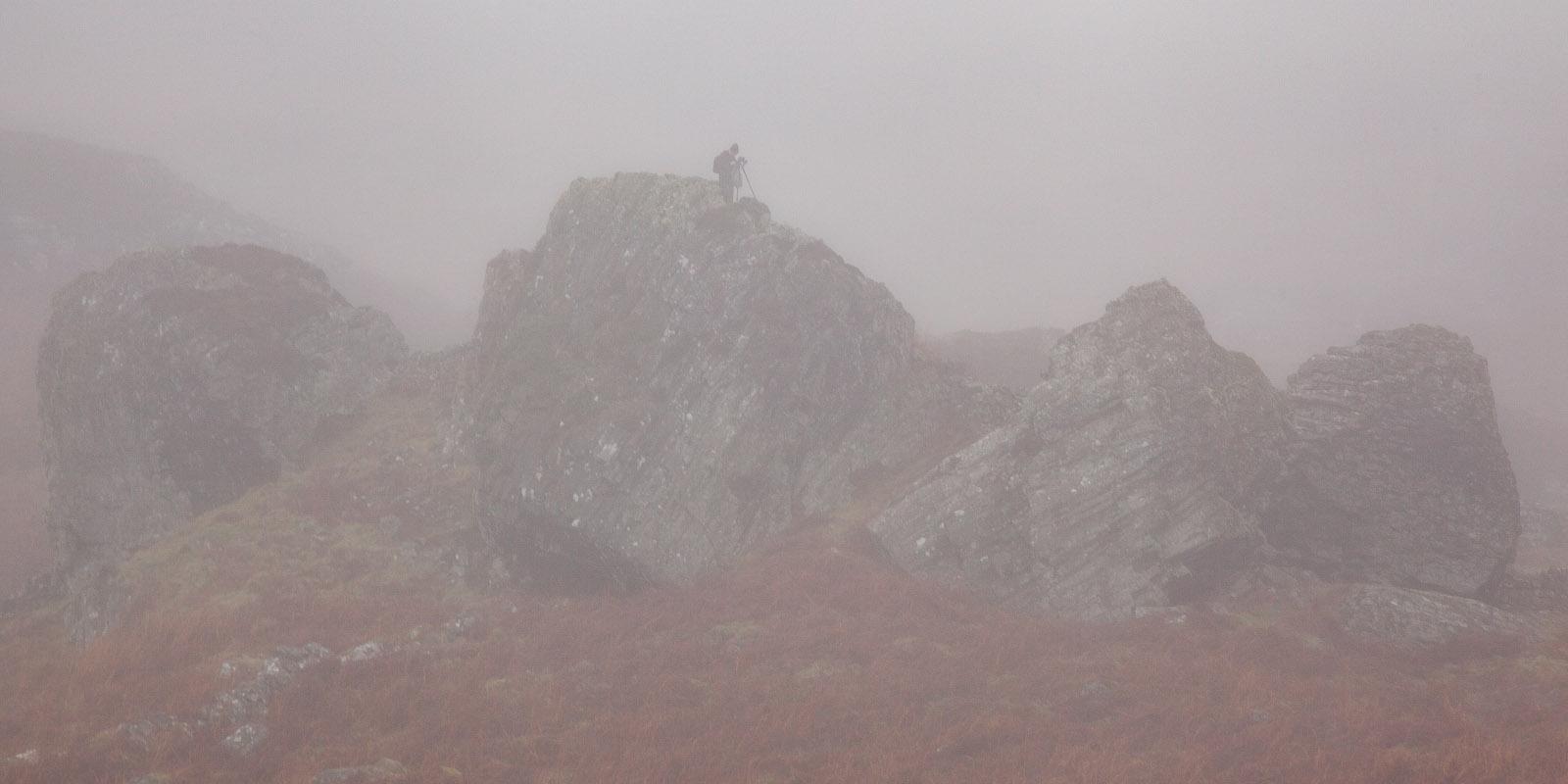 Our last day and the weather finally broke. In an effort to really get to grips with Laig Bay and Singing Sands it was decided we would take a packed lunch and spend the full day, sunrise to sunset steadily moving along the coastline from Laig Bay sands to Singing Sands and photographing anything that took our interest. Although conditions had moved from one extreme to the other now and the day started with no cloud, the sunrise was actually a strange kind of good. The patterns in the sand at Laig Bay are always interesting and didn't disappoint on this occasion, giving the appearance of an oil slick on the beach in the pre dawn glow. The light even through the middle of the day was pretty good and meant that yet again we managed some lovely images of the geology of Eigg and the views over to the Isle of Rum. The last few hours were spent photographing a lovely subtle sunset over the Isle of Rum from Singing Sands. We used Lee Pro Glass ND filters mainly in low strengths of around two and three stops to render the incoming tide and waves with a degree of motion, rather than totally blurred and smooth which I think works much better here. Looking back at these images on a gloomy day in West Yorkshire really makes me want to return as quickly as possible, and also brings home just how lucky we were to witness the fantastic conditions that we did.

All that remains to be said is a great big thank you to the guys who accompanied me on the week, all veterans of past workshops, and fantastic company over the course of the workshop.

I will be running more workshops to both Glencoe/Highlands and the Isle of Eigg, with trips planned in November of this year and January 2018. Please see the workshops section for more details.